Skip to content
Join 89 other followers
Posted on November 10, 2018 by Singapore Expat

LEGOLAND® Malaysia Resort is advertised as having “more than 70 hands-on rides, slides, shows and attractions for families and children of all ages”. LEGOLAND® Malaysia Resort has a LEGOLAND Theme Park, Water Park and Hotel in one LEGO® themed location. It is advertised as being ” a family holiday destination offering adventure, education and fun for action-packed day trips or a short break destination.” LEGOLAND Malaysia Resort is designed for families with children aged 2-12. It is the first of its kind in Asia and the largest in the world.

When is it open?

Park is open 10am-7pm (usually 6pm but it was a public holiday for Diwali). The waterpark is open daily from 10am-6pm

“It is also strategically located within a 55-minute drive from Singapore’s Changi International Airport, a regional aviation hub…”

We hired a MPV cab and left Singapore at 7:45am. We arrived at the huge border control of Singapore and then Malaysia (passports and visas with us) to a very efficient and seamless process. We arrived at LEGOLAND itself at 8:45am.

We had been warned by colleagues and friends to leave early and to expect delays of between 2-3 hours at the border. We were through the border in less than 10 minutes!

How much is it?

A theme park with a weather warning

Malaysia (like Singapore) has a tropical climate so thunderstorms occur regularly. In the event of lightning, outdoor attractions are closed for safety reasons. (For those readers in the U.K., trust me, you’ve seen nothing like a Tropical Storm in the U.K.!) As these storms generally occur in the late afternoon or early evening, the park recommends allocating this time for shopping, eating or utilising the indoor attractions. It wasn’t necessary on the day of our visit as the storms arrived very late in the afternoon as the park was closing.

This is LEGO, the worldwide supplier of building bricks to the world. As a consequence you’d think the park would be on a par with Disney or Universal Studios. Not a bit of it.

The entrance was through a desserted covered shopping walkway with only a few shops open (the rest completely empty). Then there is a huge building site for the new aquarium being built to walk alongside through to the gates of Legoland itself.

The entrance was also being “remodelled” and was a building site. No fancy hoarding or distraction to cover up this work – merely blue corrugated 10 foot fencing to walk alongside to get into the park itself. 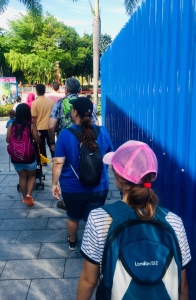 Nevertheless we had an excited 12 yo with us who was keen to explore and go on all the rides.

We arrived at 10 am when the park opened. Only a few rides were open, the rest opened gradually throughout the day. Again no note of that on the website. Cafes, sideshows and restaurants were all closed when the park opened and gradually opened later on in the day. There really was no sense of creating a good impression by being ready to welcome paying guests.

It was Diwali holiday and we were expecting huge crowds. (After all this is the largest Lego theme park in the world.) As a consequence we had bought ‘Hero Passes’ to enable us to queue jump. The park was empty. We didn’t queue anywhere anyway – merely has to wait for the previous riders to finish their ride. We didn’t need the ‘Hero Pass’ as there were no queues, anywhere.

All of the Lego statues dotted around the park, and especially in Miniland, were impressive but jaded and faded and in need of some care and maintenance. Most of the mechanics in Miniland were not working. It just looked shabby and under maintained and not at all what to expect from a world renowned brand and theme park.

Our 12yo enjoyed the rides we did (eventually) go on. They are fun for under 12s.

The waterpark was a huge contrast. No faded or jaded Lego statues here – it was a fun slide filled park and pool. We spent the entire afternoon going down the various slides, with and without tubes, rafts and floats. The lazy river had floating Lego bricks to build with whilst relaxing floating around. It was great fun. There was a huge “Joker Soaker” which was a huge water based playground and great fun for all ages.

Is it worth going? Hmmmm it depends on the age of your children really. Younger kids will really enjoy the rides but probably not appreciate Miniland or the Star Wars exhibition (which was good). The waterpark is definitely worth a visit and great fun. Would I go again? Probably not. Hiring a taxi to get there and back from Singapore was expensive and overall it wasn’t great value for money. I genuinely was disappointed – which is sad really because we live LEGO as a family.